I think it's about time to update this shit. Lifethings first.

So Stephanie and the Bay are still living in my house. My camera skills pretty much revolve around my ability to take a picture of two babies not flailing around like, well, babies. The Bay helps. He has the unique ability to pose for a picture while we all wait around for the Wiws to calm the eff down. Small note, the Wiws never calms the eff down. Never. Not even for a nutcracker and random candle, and that would make sense if you were trying to make sense of the World According To Small Babies, and I'm not so fuck everyone. Here, have a picture. 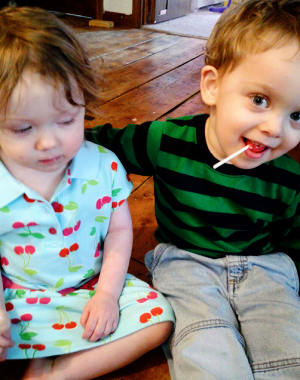 I actually had to open PSP for that. Shit hasn't been opened in so long, my computer almost choked and died in the process. WHATEVER COMPUTER.

I have one less job now than I did last year, I'm on all of the same medications, I'm now getting allergy shots that itch like a bitch, I've developed an unhealthy liking to heeled boots even though I'm already colossal, and I just sneezed and farted at the same time. This is what happens when your sneezes are so sudden and violent that they... make you fart at the same time. I think I might have wanted to go in another direction with that one, but we take what we can get.

For those of you who wander around, here is my Twitter. I'll come back with something kpop-related because god knows I've tried to quit that and failed. Way of life, y'all. Way of life.

So I pretty much live on Twitter these days. Update that on the regular. I am seriously on LJ every day but never get around to actually updating. I mean, I have the time, and I read everyone else's shit, I just never bother with myself.

The quick and painless? Good music, good choreography, good mo-nay, good iffy health, 99 problems but a bitch ain't one. etc. To put things into perspective, I'm listening to Sisqo right now. Take that how you will. UNTIL NEXT TIME.

So I have a new tattoo. Brings the grand total to two and they're both Kpop related and totally fanatical and I just don't care about who judges me for it. Because fuck you. My body, my choices, me dealing with the consequences. It's not like I'm tattooing a dick to my forehead or something. Not that's an idea.

On the topic of my job, I work less hours which means less money and I still have to pay for my health insurance. Which I love to do because why not charge me forty dollars for a prescription I have to refill every fucking month. No, that's cool. I only have to work four hours to earn enough money to pay for that, but no. That's cool. I like it. I like when I'm required to have a job to survive but get totally screwed out of all the money I make. I also like having to pay to go see my councilor every week. You know, so I don't crack and start punching old people because I'm pretty sure you go to jail for that shit.

And to end this entry on a fandom note, Cross Gene and I are getting so god damn married. Everyone is invited.

Okay I'm really trying here. I think I write more in my fic rec emails to my sister than I do on here and Twitter combined. But let's see what I can cover right now.

In regards to real life, I'm turning 27 next month. Which makes me feel old. Because I am old. I'm like a fucking fossil with my ancient Kpop love and my sagging face skin and holy shit my hands look all liney and shit. One of the few things softening this blow is the knowledge that everything else gets a year older with me.

Which brings me to my next problem. Niel is going to be eighteen in August, according to the real math of the real non-Korea world. This seems so trivial and stupid and against the problem everyone else is having but I just don't know what I'm going to do with myself. I'm going to have to put an immediate stop to all of those weird daytime thoughts where I take him to the park and buy him a new jacket and make sure he's tucked in at night. My mothermode is so out of control, I'm going to need to have real kids soon or fucking something because I seriously feel heartbroken over this.

And then there's EXO. No, actually, no. I'm not going there.

AND WHERE THE FUCK IS BEAST. WHEN ARE THEY COMING BACK TO ME. I WANT TO DIE.

Didn't update for the entire month of May. I'm clearly on top of things and totally in control of my life and choices. And of course by that I mean I'm completely and totally not but shit there's really not anything I can do about it.

Work is a lot of, well, work and my insurance is shitting it's liquid load all over my poor defenseless chest and my bedroom still isn't done and I don't have enough time to keep up with any fandoms, let alone the ones I actually care about and it doesn't help that those SM boys be creepin in on me and sometimes my arms go numb right after I lift my employers full weight when transferring her.

So I'm unmedicated, untreated, probably sporting a few new unidentifyable symptoms of my condition (which is still up in the air as maybe "not real" according to people who may or may not be close to me) and Beast still hasn't given me anything to work with so I'm drowning my ugly tears in B1A4 and Infinite and Exo and I don't even care anymore, which is probably saying a lot at this point because I never really cared before, either, but at least now I'm admitting it.

And that's what's going down in this particular part of the world. And that's all I have to say about that.

If you follow me on Twitter, than you totally know what EXO has done to me as a failed specimen of person, and for my epic amounts of creepiness, I apologize. Not sorry, though. If you're with me on this, awesome. Good. Awesome. If you're not, that's cool too. I respect your self-control and your ability to keep your dignity in tact. You should write a book and send it to me so I can be better prepared for this sort of shit in the future. Until then, I'll be over here crying into my pile of Kpop swag and wondering where everything went wrong.

On to other shit.

I'm painting my room grey to match my mood, cat, fandom and need for a neutral area that I can fuck up with lots of colorful posters. I'm about half done, and then I'm ordering my bed and then my life will be complete. That's the plan as it stands, don't try to talk me down. Here's your icons. I hope you're happy because I'm not and want to purge my eyes and I may never go to tumblr again. I feel dirty. I feel used.

I'm so tired and medicated but I can't sleep. It's like hell. This is hell. I'm going to get two hours of sleep and then I'm going to have to work all day. And you know what? I'm going to spend an assload of money on shit I don't need so when I get home from work sometime two weeks from now after going through this exact same series of events again, I'm going to cry in my driveway while clutching some ancient kpop swag that is probably just going to get piled on all my other kpop swag because, why god damn not? It's not like I'm going anywhere anytime soon and I'm not getting any days off and in two days I'm going to go back to the overnight job and deal with magical maggots again because yeah, sure, it's totally normal for a dude to pack four hundred of those bastards into an open infected wound and be all B| when someone gets grossed out. Dude, I did not sign up for maggots. I did not sign up for maggots.

And that's pretty much all I have to say about that.

As my Hunger Games gift to myself, I purchased the blu-ray box set of Battle Royale. It is fucking awesome and if you don't already own it, you god damn should. I've also posted just shy of seventeen thousand pictures to my twitter since getting my new phone because my phone is beautiful and allows me to do so. I've never had a nice phone so let me enjoy this~.

And people need to stop stealing my money. Full stop.

Found the bed frame and mattresses I want. Still convinced it shouldn't be such a bullshit process, but whatever. Now I just have to clean and spackle the walls in my room, then paint them, then move my old bed out and then I can actually buy my new bed. It'll be worth it to cover my entire bed in pillows and swim around in it like I'm five or a rat or something. Ugh. Dreams coming true over here.

Andrea and Cherell-Lovely got me a Hyunseung pillow. He's currently sitting pretty next to one of my many raccoons and guarding my Clockwork Prince book from possible thieves. Like Thomas. Who expressed his undying love for TOP earlier today and followed that up with a comment about how he would give himself to TOP if he asked. Questioning his sexuality so hard right now, but it's TOP so it's not that weird. I guess. No, it's weird.

If anyone reading this can't tell based on the rambling, medicated out of my skin right now.

Also just realized that I totally admitted to reading trashy young adult novels. But it's like. Whatever.